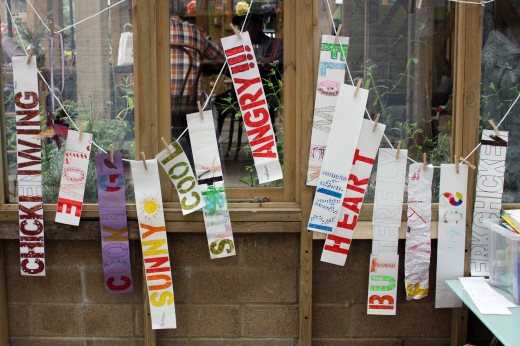 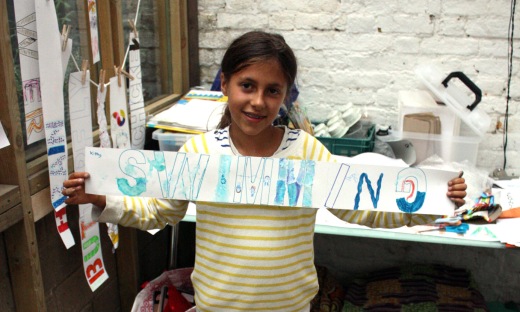 “I took part in a ‘Type Tasting’ workshop run by Sarah Hyndman at Dalston Eastern Curve
Garden. The project was fun and nice to do because you could do what ever font you wanted and Sarah helped you if you were stuck.”

“We chose a word and then designed and coloured it to look like it’s meaning. I chose my word swimming because it’s something I really love and I thought I could use water to help make my word come alive which would be fun. I decorated the letters with water colours using felt tips and then ran the letters under the water to make a smudged effect. It is exciting to think my word will be displayed at the London Design Festival”

Kitty’s brother Bruno Cox, age 7 years old explains that “I chose the word ‘reptiles’ because ‘animals’ had already been chosen and reptiles are my best classification of animals because crocodiles and lizards are my favourite animals. I made the letters quite scaly and with one of the letters I made it into an actual snake.” 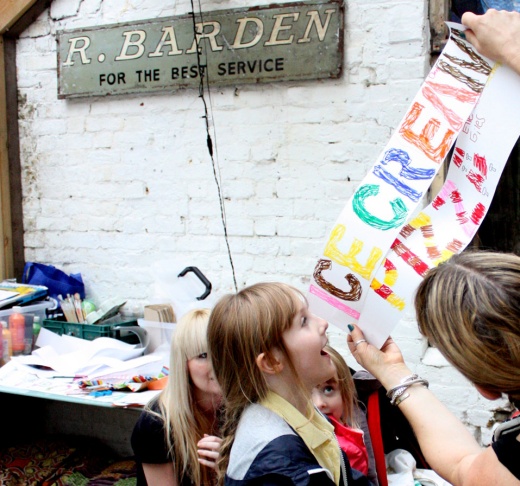 Kitty: What inspired you to do this project?
Sarah Hyndman: I set up my new business called Type Tasting earlier this year as I really enjoy inspiring creativity in others. Type Tastings are workshops which combine hands-on creativity with learning about typography in a fun way, not from reading about it in books. I really enjoy running these workshops and I thought it would be an interesting challenge so do something with the London Design Festival as this a big event and it would be high profile enough to get lots of people to join in. I suggested it to the Festival organisers and they liked my idea enough to offer me a space in the V&A.

This has been a really exciting opportunity as it has enabled me to meet so many new people and run workshops in really interesting places to collect enough words together for the exhibition.

Kitty: Who inspired you to work in typography?
Sarah Hyndman: I enjoy all aspects of design but have always been drawn to words and lettering. I started to feel confident about using typography after I studied an MA in graphic design at the London College of Communication, one of the best colleges in the UK to study graphic design. It was the tutors and my fellow classmates who inspired me to really enjoy type and my final big project was very type based. Designers who inspire me for their typography include: Stefan Sagmeister, Ralph Steadman and Saul Bass.

Kitty: How old were you when you first wanted to be a graphic designer?
Sarah Hyndman: I’ve been creative and enjoyed drawing all my life, I used to spend hours
with my Grandad on a Saturday afternoon learning about colours, perspective and painting.
I didn’t decide to become a graphic designer until I was 27, although before that I worked
for sign making company and also created and printed t-shirts so I was designing for a
long time without realising I was a ‘graphic designer’.

Kitty: Is this the first time you have run workshops with children?
Sarah Hyndman: I usually run my workshops for adults, but I’ve done a few with children now. I ran one with Hackney Wow for 50 year 6 children at Hoxton Hall earlier this year, and recently also ran one for 12–26 year olds at the Islington Community Theatre. For the adults’ workshops I do an introductory talk about typography at the beginning and the workshop is longer.

However I think the most creative and surprising results have come from children as they are used to experimenting and mark making at school and they have very vivid imaginations.

“See the selected children’s words, including mine, together with words by the best typographers
in the UK at the V&A London Design Festival 14–22 September”

‘Swimming’ by Kitty Cox is one of the words that will be displayed at Type Tasting with the London Design Festival 2013 at the V&A.